Today my daughter got her braces removed! I don’t remember being old enough to have a teenager having braces removed… but there she is.

Here’s what it can look like when a Director and a Set Designer have their first meeting about a set! We chatted about the play over the phone first, to discuss “approach” and the play as a whole. Then, a few days later, we had a 40 minute sit-down discussion, and left with a starting point! Fun, and exciting. Now to sit down and re-read the play with the starting point in mind…

Ah, another one of those kids I don’t feel old enough to have. This evening we sneaked out to do some shopping for Jeanne’s birthday. (Don’t tell her, it’s a secret!) (Well, the shopping part is… she already knows about her birthday.) 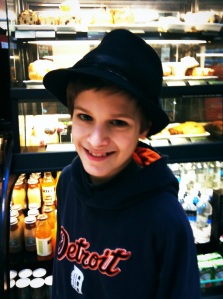 This last one is fun…. it’s from USA TODAY (By Kirill Kudryavtsev, AFP/Getty Images), and the caption read:
A woman sips a cup of cappuccino with the portrait of Russian Prime Minister Vladimir Putin, created with cinnamon and cocoa powder, floating on top at a coffee shop in Moscow.

I think the next time I’m in Starbucks, I’m going to ask for a nice President Obama made out of cinnamon and cocoa on my Pumpkin Spice Latte…