Clutter.  That’s been on my mind a lot lately.  Clutter of stuff both physical, and of the intangible.  The things we can’t touch, yet they weigh us down anyway.

When you’re clear about your purpose and your priorities, you can painlessly discard whatever does not support these, whether it’s clutter in your cabinets or commitments on your calendar.   –  Victoria Moran

I’ve been working to DO LESS.  This is new for me.  Juggling multiple projects, diving into things, saying YES to lots of stuff – that’s just always been how I did it.  That’s not bragging or anything, it’s just my history.  Now that I’m purposely making more time on my calendar for doing nothing, I’m finding myself thinking about the clutter in my world.  The basement full of junk that I move around, and move through, that I don’t really need… and how it gets in my way.  The subconscious thoughts that I let drive me because I’ve not let go of a frustration, or a grudge, or a jealousy.  The very CONSCIOUS thoughts that I dwell on when I should be letting them go because they’re not doing me, or the people around me, or the world any good at all.

The point is, you need to distinguish between what honestly moves you and what the world is telling you should melt your heart. If something doesn’t reach you on a personal level, let it go. It’s hard enough dealing with everything that does.  –  Judi Culbertson

It’s funny.  I had this thought very clearly the other night.  With family, at Hudson Mills metropark, spread out on blankets and looking up at the night sky, waiting for fireworks to begin.  My son and nephews were running around playing catch, my wife and I were relaxing on the ground with my mother and my daughter, just chatting. Max’s girlfriend Sophie was there, we were all laughing and just being there.  There were hundreds of people, all around, doing the same thing.  With my head resting in my wife’s lap, I found myself a little overwhelmed with emotion- not gonna lie, this happens to me more and more over the last few years.  I looked up at her and I said “I love tonight”.   She smiled, and bent down and kissed my forehead and said “Well good!  Me too.”

Just being there, listening to the people laughing and enjoying the night, was wonderful. The smell of the grass, the breeze blowing, kids running around everywhere being kids – as the night got darker the fireflies came out, and soon little kids all around us were chasing them, gathering them in their hands.  It was a beautiful, perfect LACK of clutter.

And then the fireworks began.  The running around stopped and the “OOOOHS” and “AAAAAHHS” started as the world filled with color and sound.  Clapping and laughing, people announced their favorite firework.  Watching the faces of my family light up with reds and blues and whites, I couldn’t resist taking a picture: 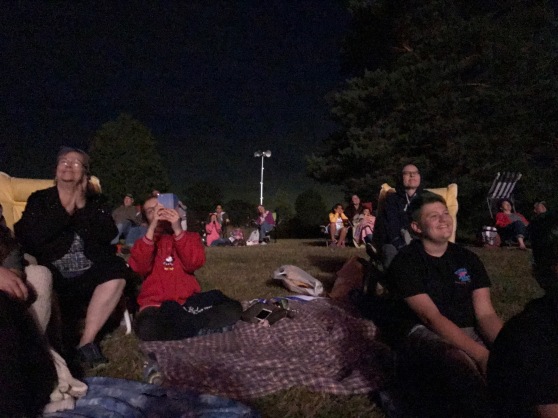 Lit by a big burst of white stars, my mother, wife and nephew have the same smile I had on my face.  Maggie does too, as she takes a photo of the fireworks to send to her friends in Finland!

The waste of life occasioned by trying to do too many things at once is appalling.
–  Orison Marden

The whole night was terrific.  One of those moments that is both a little thing and, at the same time, everything.  Later that night, at home, everyone camped out around the house to spend the night, I listened to the house settling down, kids falling asleep, dogs snoring, the occasional late-night-neighbor setting off a firecracker or twelve, and my mind drifted to my to-do list, and all the things that would need to be done the next day.  With a little effort, I pushed the thought away.  I could clear that clutter later.  This night?  This night was simple.

2 thoughts on “Out of clutter, find simplicity.  ”