I’m pleased to report that Ernie by Mitch Albom, the show I directed at the City Theatre in Detroit, has been extended again through August 12th!  Ernie, which opened April 28th, is a crowd-pleaser!  I was there this weekend and felt very blessed to sit and watch the sold-out crowd of nearly 400 people love the show from beginning to end.  Very proud of the cast, crew, staff and whole team.

In other Good Theatre Things:
The Williamston Theatre is honored to lead the Wilde Award Nominations this year!

The winners will be announced at a ceremony in Detroit on August 21. 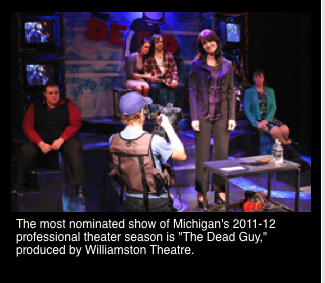 I’ve been honored to work on some wonderful projects with some wonderful people over the past year, and it still amazes me that I’m lucky enough and blessed enough to do what I do for a living.

In order to attract more of the blessings that life has to offer, you must truly appreciate what you already have.  –  Ralph Marston