-Finished up callbacks for next season. Manohman, there’s such a fabulous, excited feeling of “The Future” when you’re at this stage – knowing the great scripts that are coming up, the potential that you get pairing those with talented production teams and casts, so much anticipation! I’m like a kid in a candy store who just got a handful of cash from Dad to get whatever I want!

-So we’ve been playing the game “King of Tokyo”. It’s a ton of fun, the whole family is enjoying it! Basically you’re a monster rampaging Tokyo (you know, like you do), and so is everyone else at the table, so you try to beat them! Really fun family game – strategy, luck, teamwork, and silliness. 🙂 Here’s a little video (My wife was playing too, but didn’t want to be in the video!)

-So far this summer I’ve seen the two big blockbusters I was excited about, Star Trek: Into Darkness and Man of Steel, and I can say this: They were both good reminders that, as a storyteller, what matters is the storytelling. Flash and glitz are great, but if the *story* isn’t strong, if the characters aren’t compelling, then the experience is weak. A good reminder as I launch into plans for next season at the Williamston Theatre, where our audiences are counting on good experiences.

-Speaking of movies: In a public restroom at a movie theatre. A long line of urinals with men standing in front of them, most of them doing what you do at a urinal in a public restroom… except the guy next to me, who is talking. Now, people talk in restrooms. But he was talking on his phone, loudly. Well, we thought he was just “on his phone”. Turns out, he was Skyping someone from his smart phone. Yes. VIDEO chat. At a urinal. With what, it turned out, was a ROOM FULL OF PEOPLE ON THE OTHER SIDE OF THE COUNTRY who had also just seen the movie that he had seen, and wanted to chat about it. And we all hear them asking him “Dude, are you in the restroom?!” and to prove that he was, he waves his phone around the room so they can SEE the long line of urinals, and the men standing at them^!! (It’s rare that you make eye contact with another man at a urinal, but there were several of us looking around at each other with little bemused head-shakes at the guy and his videochat!) *sigh* People are amazing. It would’ve been the perfect time for a *facepalm* but, y’know… that would’ve been unsanitary.

-This week has been a lot of fun: my brother-in-law Bill is back for a visit from Taiwan with his wife, Joy, and their 3 kids. It’s been a couple of years since we’ve seen them, the kids are super sweet, and we’ve had a wonderful time visiting and hanging out! Also, it’s been a lot of fun comparing all the cultural differences, and the similarities, and just enjoying the reminder of how much people all over the planet have in common. Coming up this week – a Tigers baseball game with the whole family!

^Footnote: After he left, the guy who had been on the other side of him said, to no one in particular, “I FEEL VIOLATED!” which, of course, got a nice laugh from everyone else there.

Happy Wednesday, everybody! Be safe out there!

A handful miscellaneous stuff from the life of a Dad and Director:

I’ve been playing with the Vine app on my iPhone a lot lately, it’s fun.  I let my kids play with it while we were waiting around in a phone store the other day.  What did we learn from this?  The following: Dads, just because your kids are old enough to not run off in a store does NOT mean you can close your eyes and relax!  😉

A nice promo photo for Sweet Mercy by Melody Cooper, which I’m directing at MSU right now – we open next week!

The Stephen King book Under The Dome was pretty good, I enjoyed it.  They’ve made a tv series of it that will premiere this Summer.  As a promo, you can see what your house would look like if it was “Under The Dome”.  So here’s mine:

Scary, right?  Of course, if there were a way to make this whole dome thing equal less leaf raking in Autumn, it could be worth it…

Hey! Check this out!  The Williamston Theatre was featured in the Actors’ Equity Association Newsletter this month!  (AEA, for those who may not know, is the union for professional theatre actors and stage managers)  You can get the Newsletter HERE and check us out on page 4!  (Below is a pic of what it looks like!) 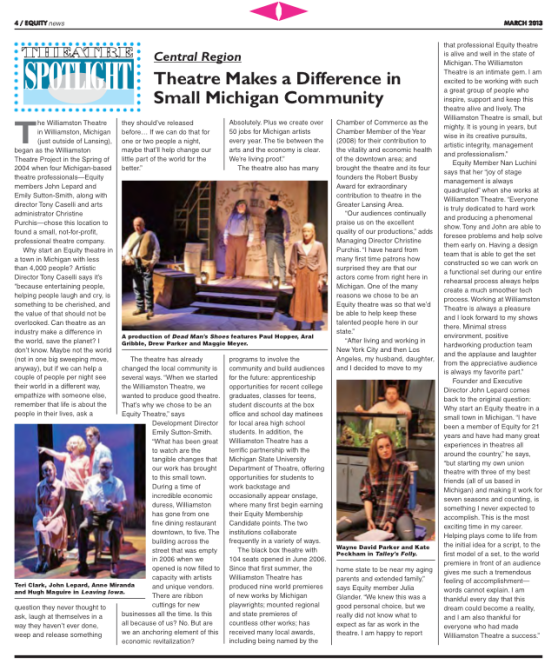 And, in other Williamston Theatre news, here are 3 of the 6 plays we’ll be doing next year!

Of course, I can’t really reveal the titles yet… but trust me, they’re pretty awesome.  🙂