Boy, January flew by.  I was directing a play, which is part of the reason, but also it was a month of weird anniversaries and things.  Over the last few weeks we had my birthday (yay 47!), the 2 year anniversary of me going into the hospital and going into a coma, and the 1 year anniversary of my father passing.  All of that stuff led to me being in a weird place for several weeks, but I guess that’s normal.

Of course, adding to the weirdness was the fact that the play I’m directing is about, among other things, a family dealing with the death of the father.  So, that made it a pretty emotional project.  Fortunately the show, Too Much, Too Much, Too Many, is gorgeous and I got to work with wonderful people while creating it.

Here’s a shot from the show! 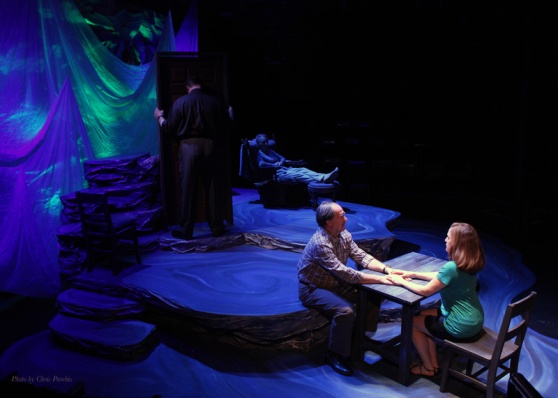 I really like the composition of this moment in the play.  🙂

I’m also pleased to report that there is a ton of wonderfulness going on in my world, both with family and work.  Got to see Maggie’s final home concert with the Chelsea House Orchestra, and next week I get to see the one-act play that my son Max on as Student Director!  And this week was the birthday of my beautiful wife, which is definitely a day to celebrate!

Now, though – I’m off to the final preview performance of Too Much, Too Much, Too Many.  It’s one of those pieces that reminds us, because sometimes we need reminding, that life is short, and putting up walls between us and our joy just doesn’t do anybody any good!  Live your lives, folks – live for yourselves, and for the people you love – all we have is what we make with each other.

Every moment of light and dark is a miracle.