“A love letter and a workplace comedy” – good review from Encore Michigan!

Lansing City Pulse says “Parker and Caselli crackle with mutual distrust and animosity that slowly morphs into warm respect. Both believe the other to be an inferior actor. Watching them prove otherwise to each other is a treat.” – read the whole review here!

The show is a “hilarious theatrical journey”, according to The Greater Lansing Ubiquitous Theatre Online!

More reviews to come, but the important thing is that audiences seem to be enjoying the show!

Miscellaneous things on a Friday afternoon!

A stair not worn hollow by footsteps is, regarded from its own point of view, only a boring something made of wood.
Franz Kafka

It’s Opening Night for The Understudy!
Here’s a fun article from the Lansing City Pulse previewing the show

It’s Towel Day! What’s Towel Day?! It’s a day celebrating the life and work of Douglas Adams, author of The Hitchhiker’s Guide To The Galaxy, among other things!)

To celebrate, you’re supposed to carry a towel around with you!  “Why?”, you ask? Read on…

“A towel is about the most massively useful thing an interstellar hitchhiker can have. Partly it has great practical value – you can wrap it around you for warmth as you bound across the cold moons of Jaglan Beta; you can lie on it on the brilliant marble-sanded beaches of Santraginus V, inhaling the heady sea vapours; you can sleep under it beneath the stars which shine so redly on the desert world of Kakrafoon; use it to sail a mini raft down the slow heavy river Moth; wet it for use in hand-to- hand-combat; wrap it round your head to ward off noxious fumes or to avoid the gaze of the Ravenous Bugblatter Beast of Traal (a mindboggingly stupid animal, it assumes that if you can’t see it, it can’t see you – daft as a bush, but very ravenous); you can wave your towel in emergencies as a distress signal, and of course dry yourself off with it if it still seems to be clean enough.

More importantly, a towel has immense psychological value. For some reason, if a strag (strag: non-hitch hiker) discovers that a hitch hiker has his towel with him, he will automatically assume that he is also in possession of a toothbrush, face flannel, soap, tin of biscuits, flask, compass, map, ball of string, gnat spray, wet weather gear, space suit etc., etc. Furthermore, the strag will then happily lend the hitch hiker any of these or a dozen other items that the hitch hiker might accidentally have “lost”. What the strag will think is that any man who can hitch the length and breadth of the galaxy, rough it, slum it, struggle against terrible odds, win through, and still knows where his towel is is clearly a man to be reckoned with.” 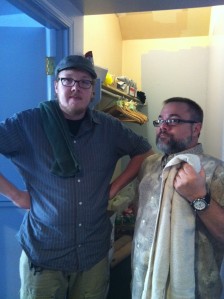 In other miscellaneous news – today was “Moving Up Day” for my daughter. This means that she spent the day at the High School she’ll be attending next year, in an orientation. This also means that suddenly my little girl is in High School!! WHAT?! Oy… didn’t we just start her in kindergarten?! *sigh*

Anyone who keeps the ability to see beauty never grows old.
Franz Kafka

So, life is busy. Starting performances of The Understudy this week, my son had his 12th birthday, my daughter and wife just got back from a trip to Washington DC where they did all sorts of cool things. Busy, but good!

Here’s a fun video from Tech Day of The Understudy, at Williamston Theatre:

And from tech day, here’s a shot of a fun little corner of the set that I like! 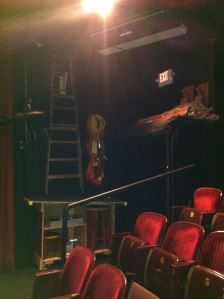 And a picture that I like a lot from the show: 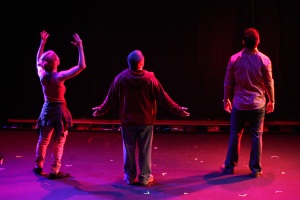 Also, my friend Michelle (who is in The Understudy, and pictured above), did a photoshoot for a talented photographer, Chris Arace, and I think this is a really cool picture!

Maggie, hugging a panda bear statue. I love this picture! 🙂 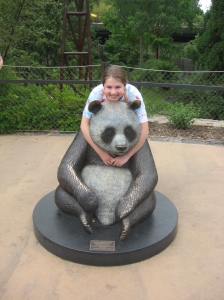 Everyone who came got moustaches to wear. Just because. And, as you can see, they took them very seriously. 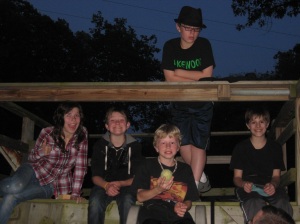 Here’s a handful of the party-goers relaxing outside!

I hope everyone out there is having as wonderful a week as I am! 🙂